“You know what? You wanna know the best thing about all the chaos that’s been happening for the past few years in our homes, in Arab countries? It’s that it’s made us closer. Closer to one another. I never would have imagined that in my life I would come to have two true sisters from Palestine and Egypt.” — Hala*, QUWA participant and Shaamuna organizer

Tala* is a spunky 17-year-old Syrian woman who rocks high-tops, skinny jeans and the most perfect cat-eye eyeliner I’ve ever seen. She raps and writes her own spoken word. She’s what we would call a fabulady Syipster (syrian-hipster, thanks noorhay for coining this term). I was paired with Tala for a debriefing activity on the second day of the healing circle, one that was all about recognizing our vital strengths and knowing ourselves. While talking about our favorite characteristics/what we love about ourselves, she mentioned that she’s proud of and loves how much she looks after and stands up for herself.

We talked about the personal, social and political obstacles in our life. I talked a little about being an arab, muslim WOC in the US. About how it sometimes got tiring to live and be. I talked about the misogyny, police brutality, racism and discrimination I grew accustomed to during high school and college. Tala knows a great deal about discrimination. She told me how difficult it is to find a job or to re-enter school as a Syrian refugee in Turkey. She’s been trying at it for a year, but still hasn’t been able to find something sustainable. As soon as they know her identity, the wage drops dramatically, she told me.

I don’t remember what she said when we discussed our fears. But I shared with her that one of my fears is establishing new relationships with people after college. I talked to her about how I had such an amazing circle of people in undergrad and how I didn’t really feel like expanding it, starting over, or coming to terms with the fact that people I love and used to see everyday multiple times a day are now thousands of miles away from me. She nodded and shared her own stories of losing friends at home, in Shaam.

Talking to Tala was fantastic. She didn’t make me feel guilty or weird for basically saying I’m at a point in my life where I have an aversion to new people. Instead, she said she was quite good at evading relationships/people when she wanted to. Like the multiple suitors who’ve been wanting to get to know her ever since she moved to Turkey. Below-average randos she has no interest in talking to. Sometimes her parents ask her to at least give them a chance, to meet with them or see them just once. She shared an instance where she finally agreed to see a non-Syrian, Arab suitor who came over. “I told them, OK sure, I’ll see him–no problem. So he came over. And when I first walked in, you know what I did? I walked in and said very sweetly with a straight face, ‘salam 3amo, keef 7alak?” and then I sat back and watched his face freak out because I called him ‘3amo’ (mister). It made him feel like a creep. And that was it.”

Tala is the queen of subversion. She goes along with things, with people thinking they are getting their way, but finds loopholes and subtle ways to drop what she doesn’t need in her life. I’ll def be using this tactic as needed, and I’m looking forward to learning more from her brilliance. 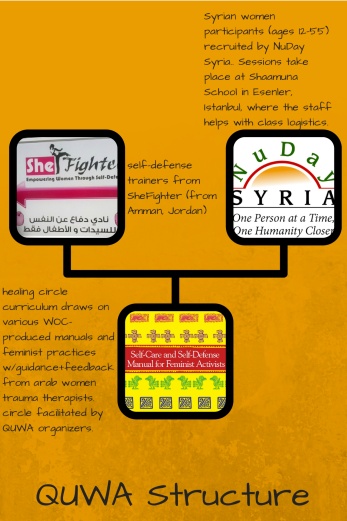 QUWA is a rather ambitious project–with multiple actors from different organizations and countries working together to make it happen. Our funding comes from different sources, mainly the Kathryn Davis Projects for Peace award but also from smaller grants through the University of Michigan, sponsorships from humanitarian organizations (like Women for Humanity and Dar El Salam Travel), and crowd-sourcing $$ from generous friends and strangers who believe in anti-violence, collectivist healing models for women of color.

QUWA currently serves two groups–one for older women and one for younger women–with two components: self-defense training and a sisterhood healing circle. Click the infographic above for a look at how QUWA is pieced together.

First, we are so thankful for your generosity and kind support. Thank you so much for donating and helping us spread the word about the QUWA self-defense and trauma healing program for Syrian refugee women. We are excited to get started next week, God willing!

We’ve had a few sudden changes happen recently and we want to update you.

Unfortunately, our funding sources recently put Antakya, Hatay (where we intended to work) on a no-travel-to list.  We think we are capable of working in the area and we were so looking forward to meeting those in Hatay we’ve been in contact with for sometime now. We know that refugees in rural areas like Antakya  face more unique challenges but we have to comply with these regulations to receive the grant. Therefore, we are moving QUWA to Esenler in Istanbul. We are still working with the same organizations: the SheFighter self-defense trainers from Amman, and participants from a group affiliated with NuDay Syria called Thabitoon Al-Ard (“Steadfast on the Ground”) at the Shaamuna School. You can read more about their work here.

We will be working with 30 women participants–aged 18-50–meeting 3-4 times a week with a morning group and an evening group each day to accommodate differing schedules.

We’ll do our very best to send updates throughout the program. Please reach out at anytime with thoughts or questions.

PS–The QUWA gear is here! You’ll get yours in the mail soon–we just want to include the other goodies we promised you from Turkey. 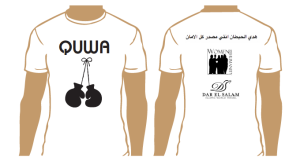